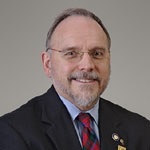 Bill is one of those unique individuals who loves crunching numbers and began doing taxes as a side hobby! He served as business manager and controller for a variety of Oregon businesses before launching his own tax firm in 1988. As the business grew, Bill saw a pressing need for his clients to develop resources for their retirement years. It was a natural step for him to add investment services so he can offer clients a well-rounded portfolio of assistance.

When not sitting at his computer, Bill is an avid distance runner. His goal is to complete a marathon in every US State and Washington, DC. Eighteen states are checked off, only thirty-three to go! Bill has participated in a number of ultramarathons - those runs that are longer than 26.2 miles. He is especially proud of his perfect record of participation in all 13 Megan’s Run events, a 24-hour track run to benefit SIDS research. Over the lifetime of the event, Bill raised more than $30,000 and ran over 1,000 miles. One of his favorite "short" runs is the Steens Rim Run, a 10K run held every August on Steens Mountain southeast of Burns. He boasts a record of participating in 34 of the last 36 events run at 9,000+ elevation!

Bill is a proud member of the Rotary Club of Clackamas, Oregon. He has presided as club president -- twice! Bill has 37 years of perfect attendance at Rotary meetings…and counting! Among his Rotary highlights was attending the International Convention in Glasgow, Scotland in 1997 and visiting several Scottish clubs. Bill attended Rotary’s Centennial International Convention in Chicago, in June 2005 while serving as his club’s centennial president. He recently assisted a new club in West Linn get chartered in April 2006.

Bill and his wife, Pam, sponsor an endowment fund at Clackamas Community College in Oregon City. The Bill McCracken and Pam Husband Endowment for Child Care provides childcare grants that enable single parents to attend the college and improve both their and their children’s lives. Bill also sponsors a scholarship for business students at his alma mater, Boise State University in Idaho.